Yeah, dart frogs are pretty nifty! I've had my 3 for nearly 3 weeks. They're more skittish than I'd anticipated, particularly compared to how they were during the 3 day quarantine (mostly to confirm that they were healthy and eating well) in my little 5g temporary terrarium. Well, sort of. One ("Spot") was crazy bold in there, but has been especially shy in the 29g permanent home, surprisingly. And the one that was the twitchiest ("Avocado") in quarantine has been the most outgoing in the big tank. They certainly have individual personalities.
Spot in quarantine: 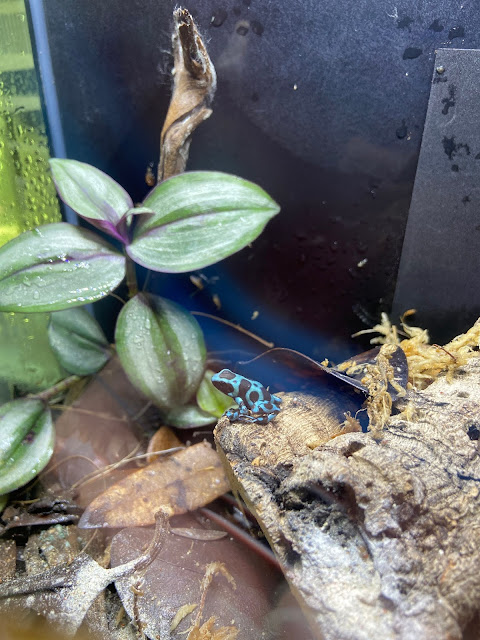 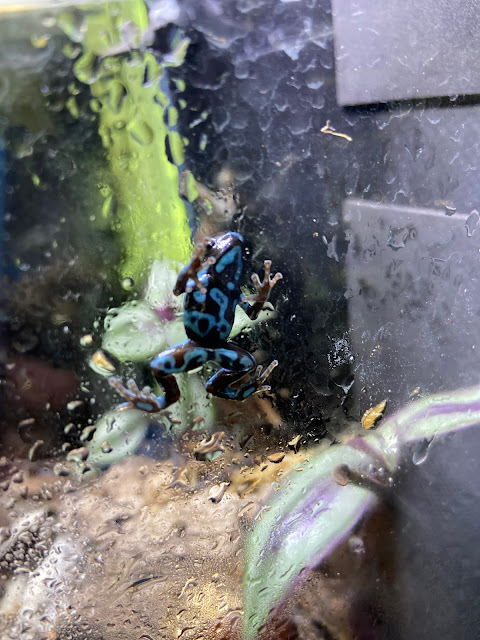 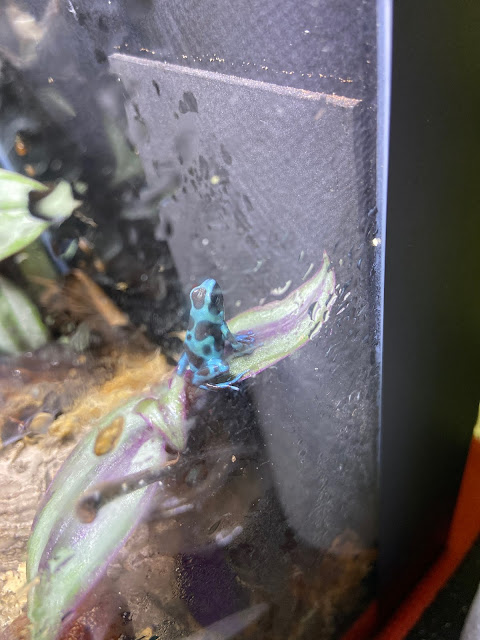 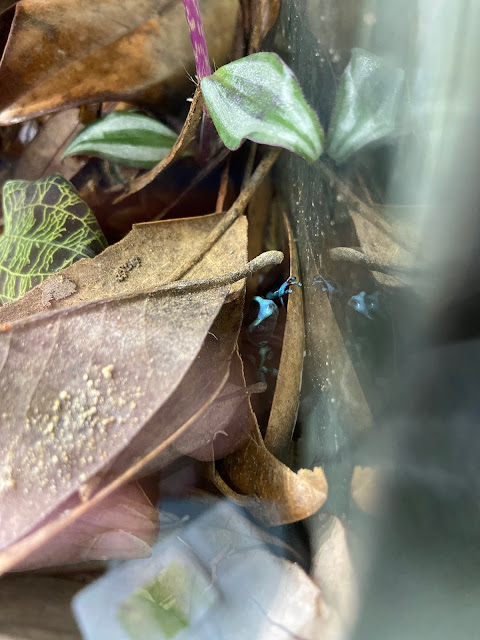 That's pretty much the most I've seen of the goofy guy/gal. Spot is the largest of the 3. I assume Spot is a bit older than the other 2. I believe all 3 are from different lineage, as Josh's Frogs discourages "line breeding."
Avocado, aka "Avo" (due to the avocado-shaped marking on his/her back) is currently the most outgoing. 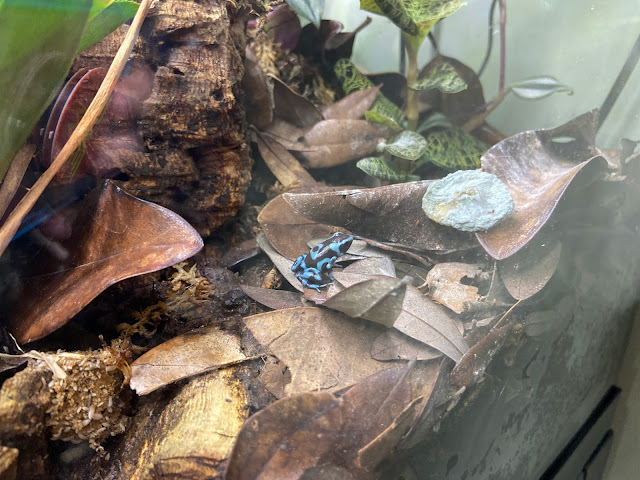 Bianchi -- named after the shade of "celeste" green made famous by the bike-maker -- is the smallest and hasn't changed a bit in personality from one tank to the other. 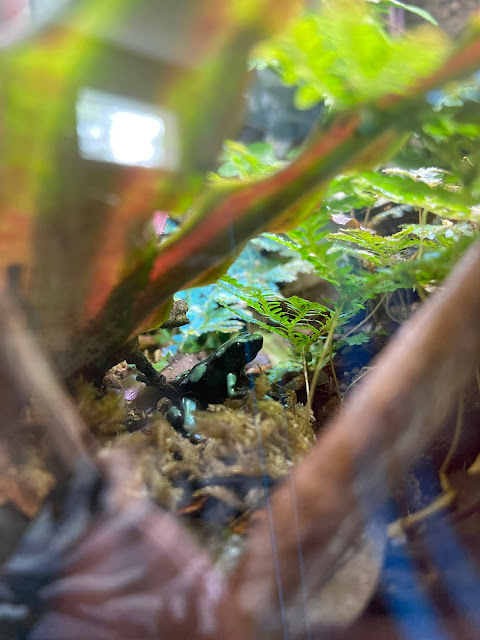 I made the mistake of not dumping all 3 frogs into the same area of the tank and they've all pretty much kept to the same general region since moved into their permanent home. As a result the 2 bluer frogs have stuck together and poor Bianchi is all alone on the other side of the tank. I hope as they all become more bold that they reunite. They're social little critters and I assumed that they'd immediately group back up.
This AM I had lab work to try and get to the bottom of what's going on with my red cells. I have mild megaloblastic anemia. Most likely due to insufficient B-12 and/or folate, but it could be the result of hypothyroidism. So I had bloodwork to screen for both. The vitamin/mineral thing would make sense, as I likely don't absorb nutrients well, seeing as how I'm missing a good chunk of my colon (thanks, Cancer!).
This anemia would explain why my workouts have become increasingly difficult and for every 2 workouts I feel like I need a rest day. 6 months ago I was SO much stronger. This has snuck up on me. For months I thought it was simply Covid-related anxiety, since so many people have described debilitating exhaustion, brain fog, and sleep struggles. But that wouldn't explain my oversized and fewer-than-normal red blood cells/volume. And in the past week I'm starting to deal with neuropathy in my hands and feet. In a lot of ways this feels SO disturbingly similar to chemo's effects -- which is very unnerving.
So, if it's simply a matter of low B-12, I'll likely have to do injections for a while...or probably permanently, since it's not like I'm going to regrow my sigmoid colon and rectum. There's apparently a prescription B-12 nasal spray that I might look into, too, since my PCP is an hour away. That drive wouldn't be a big deal, aside from Winter. Or maybe it's an injection I could administer to myself.

I was going to get 3 froggos from a guy on FB (a fellow Cheesehead who is attending dentistry school at University of Michigan and was going to meet me down in Kzoo with baby frogs), but finally Josh's Frogs had a listing for 3 Highland Bronze Auratus dendrobates after many many months of being wait-listed. So...I grabbed them. I knew they were going to list them, since their site showed 3 available, but they couldn't initially be added to the cart. They're a super high-demand color-morph, so I didn't figure I'd snag them (though a CS rep said they had about 10 that they'd be gradually listing over the next few weeks).
Sat. AM I woke up to pee at 5AM and they were there AND there was an "add to cart" button, so I did...and they'll be arriving in about 36 hours, give or take. They're making a short overnight FedEx trip from the other side of the state.
They'll look something like these guys above (these might even be my 3, since I think they have added new photos to their site in the past week).
But at full maturity the black areas soften into a beautiful metallic grey/bronze. This could be one of the parent frogs to my froglets:
I'm pretty excited. I converted an old 5g aquarium to a temporary quarantine tank, to make sure the froglets are eating OK and healthy before I let them loose in the very jungle-like 29 gallon home that they will occupy for the rest of their lives, which could be a decade or more.
Today I took care of 2 medical scans -- I had my annual mammogram and my first bone density scan. I'm really interested to see what state my hips and pelvis are in after radiation to that area (and 3+ years of menopause). In the age of Covid I was the only patient in the entire place, as far as I could tell.
Hopefully my years of high impact running will have benefitted my bones, in spite of premature menopause and radiation therapy.