We have our absentee ballots, but still need to fill them out and drop them off at our voting precinct. I'm sort of paranoid.
The past few weeks have been beyond surreal. The most unreal fiction would read more believably than this. Tomorrow will mark 3 weeks since the first (and apparently only, which is a saga of its own) presidential debate. I think it was 2 days later that Trump tested positive for Covid. What followed was...I still can't process it fully.
He was flown to Walter Reed on Friday, IIRC (my brain is already numbing itself from the recent reality of this nightmare administration). He remained there 3 nights. After 2 nights he insisted that he needed to go out for a motorcade parade around the block. Then after one more night he was discharged back to the White House.
Now he's claiming that he's made a miraculous recovery. Meanwhile a whole lotta high-ranking cabinet members and other GOP attendees of the prospective new SCOTUS nominee's crowded indoor/outdoor/maskless "superspreader" nomination ceremony who were diagnosed with Covid have seemingly disappeared.
From the outset I was not convinced that Trump was legitimately ill with Covid. I'm still not convinced. The whole thing is just...off. And the past 4 years have been nothing but a steady stream of lies and the entire Republican party covering for Trump, so I am skeptical of any "facts" coming out of this series of events. 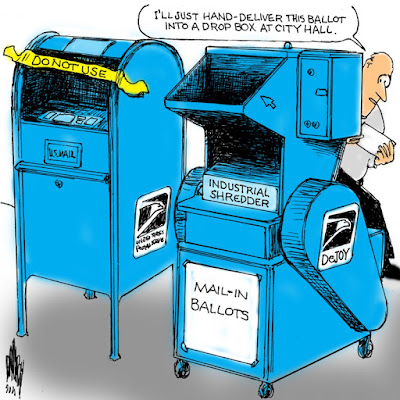 Biden is currently trouncing Trump in the polls, but so was Hillary, 4 years ago. I'm really anxious about how absentee ballots will be handled. Some states are only allowing 24 hours to count them. The Trump-installed head of our USPS had employees destroying mail sorting machines and delaying mail delivery (we had months where we received nearly no mail, most days). Trump supporters have already been caught erecting fake ballot boxes in CA. In TX the governor is only allowing 1 drop-box/county...including in counties with millions of residents. Absentee voters are overwhelming democrats. I fear that if Trump is leading at midnight that he will assume a win, even though it will likely be days before all ballots are counted. His "militia" supporters are already claiming that they will start civil war if he loses.
Which brings me to the recent drama in my state. Some MI militia (domestic terrorists) members were caught hatching a plot to kidnap and kill my governor, as well as blow up a bridge, kill some cops...just generally horrific actions.

Covid numbers are again on the rise and there's suggestion that this is the start of our 2nd wave. Winter is going to be rough. I'm increasingly anxious about my son working in an "essential" retail environment over the busy holiday season.
At least putting the election behind us will remove a massive source of my anxiety -- unless Trump "wins." I really can't allow myself to contemplate that outcome, at all. The past 4 years have been even more horrific than I'd imagined.