For the very first time in my life I'm wishing Summer would be over with. This is not normal. Nothing about the last 4-5 months has been normal, but wishing my favorite season away -- Michigan's shortest one and the one we live for during our endless Winters -- unheard of!

But Covid cases are rapidly rising thanks to tourism and people's common sense apparently taking a Summer holiday. The same sort of scenario is playing out in tourist communities all over the Upper Midwest. We're still doing FAR better than much of the South, but...the curve we flattened is no longer flat. Coronavirus does not take a vacation.

Twice my community has been in the news in the past week. First a local batter-fried hot dog vendor posted a long screed that he claims was meant for his personal page, but it was on his business page long enough for plenty of people to record screen shots of ugly, unhinged racism and general conservative BS and pro-gun nuttery. As a food service vendor he was encouraging his staff to not wear masks. Early in the Spring he opened just as the state went on lock-down...discouraging social distancing.

Then last night a woman was told to don a mask when she entered a takeout pizza joint. She refused, flipped-off the staff, kicked another customer, then went out in the parking lot, kicked a car and ran over the foot of a LEO who had been summoned. The local anti-masker crowd has a poster child. These are the people faking a disorder to enter stores...or entering a store with a mask, then pulling it off once inside; including the store where my son works. Another store in his company had a guy pull a knife on a store employee who asked him to put his mask on properly.

2020 is still beating me up. A friend shared an excellent article about allostatic load with me that really resonated. I'm doing maybe half the running and cycling that I would normally be doing...and struggling. And walking a lot, because my legs just don't want to go and my muscles hurt. It reminds me too much of how I felt shortly before my original cancer diagnosis. But it seems like plenty of people with no sketchy health history are going through the same. I'm completely annoyed by those who are having the year of their fitness careers, though. How dare they!! 😝 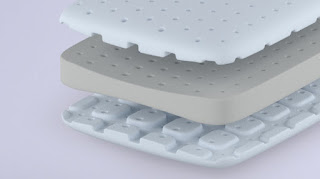 I think I finally found a good pillow (yay for Target sales and 5% off with the Target debit card), so hopefully that helps. I didn't sleep enough, the last couple of nights, BUT I did get some appreciable DEEP sleep, which has been largely lacking, of late. I've not liked the foam pillows I've squished and we have a couple of that came with our bed...very hard, unyielding things. This Casper foam pillow has a firm foam center surrounded by smooshy, marshmallow-like softer foam. It's just right for this Goldilocks/Princess-and-the-Pea. My neck feels better today than it has in months. I'm able to sleep comfortably on my sides, which I haven't been able to do in a really long time.

Another pillow I tried was kind of similar, but WAY too thick -- like 7" in the center and forced my chin into my chest. But that one has proven to be amazing behind my back on the sofa, so it's a win.

Sleeping better will surely solve a ton of ills...I hope.

When I first started this blog I had just re-scaped a vivarium that will eventually house dart frogs. At the time it looked like this: 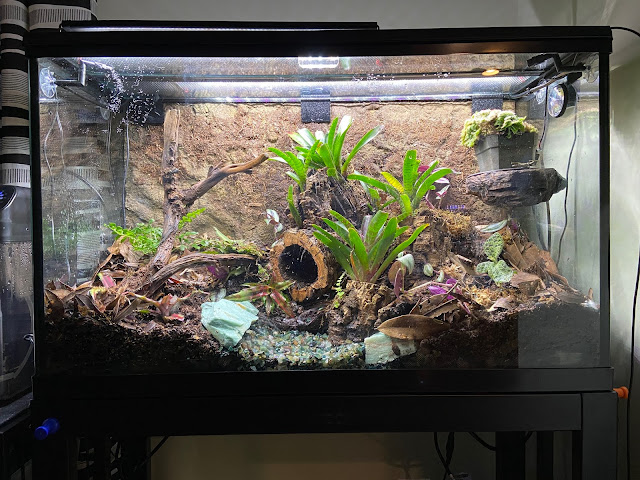 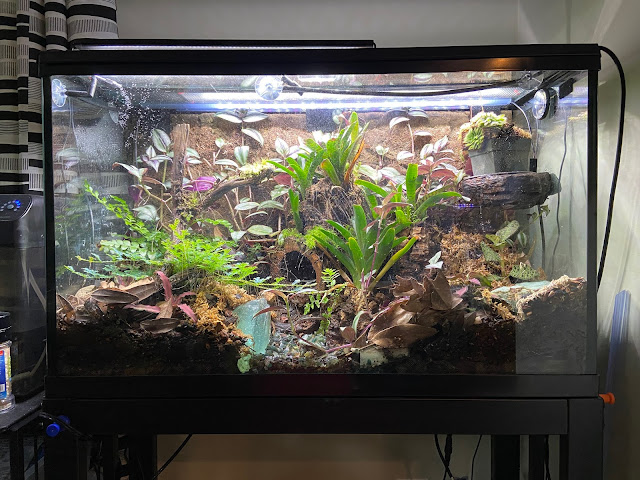 It still houses no frogs...entirely because of the Corona-craziness. And now it's been too hot to safely have frogs shipped. But I'm thinking maybe in a month or two that we'll not be hovering at or near 90º every day. I think I've narrowed my frog selection down to maybe 3 Dendrobates auratus 'Super Blue' or 'Highland Bronze'. 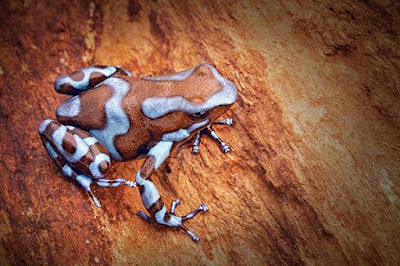 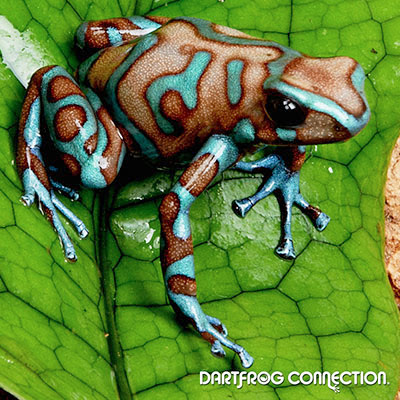 They live on fruit flies, which I'd culture and dust with calcium/vitamins before feeding, every day. And the tank already has plenty of tiny white drawf isopods (aka "pill bugs") and springtails for them to snack on. The vivarium won't require cleaning, since the isopods and teensy springtails serve as "clean-up crew."