This Town Needs an Enema! 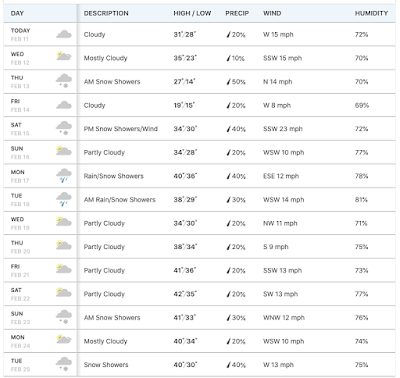 I am totally NOT a fan of MI in February...or January. November is less snowy, but cold and a fugly mix of brown and gray. March is the same. I essentially loathe half of the year, here in the Upper Midwest. I don't tolerate cold well, particularly not after chemo and losing a lung lobe (not to mention the risks of falls or repeatedly re-spraining my bum left ankle. My hips and pelvis are likely in weak shape after pelvic radiation and cancer-induced premature menopause. I'm too old for that shit). And the quality of our heated indoor air seems to exacerbate my lungs, indoors. It's a lose-lose.

The potential for sun in this forecast is relatively high for Winter, here, believe it or not.

Zwift is awesome, but even that generally amazing app has its limitations. I think the ability to make it play nice with our freebie treadmill with that new Runn device will help, but it won't replace outdoor running. Cabin fever is legit. I feel like SAD has become a thing for me. As a kid I LOVED Winter, but I've not really enjoyed it at all since I was 30-ish.

The Groundhog didn't see his shadow, which I believe portends an early Spring, but it doesn't really matter. I still look out my window at a non-sexual 50 shades of grey and want nothing more than to hop in my car and head to New Mexico, never looking back.


Why NM? Because of this.

Las Cruces looks like my idea of Nirvana. The weather, the scenery, the terrain, the food, beer, wine...weather (yeah, I said weather twice -- they average only 60 cloudy days/year. 5 cloudy days/month sounds ideal)! And it's not a big city, nor a small town -- depending upon how the population is defined, it's somewhere between 100-200k people. We currently live in a town of ~10k and it's a bit too insular. The locals are none-too-welcoming to new people. In particular to new people who are not relatively far right of center, politically. 70% of voters in our county supported Trump in the last election...and I don't see many signs of that changing this Nov., unfortunately.

I've even found a "dream house" (though I'm not sure what the elevation options might be). 2192sq. ft with room for a home gym/storage and space for Dane to visit with possible future offspring and/or my brother or friends. Housing would appear to be significantly cheaper, in that region, than it is, here. 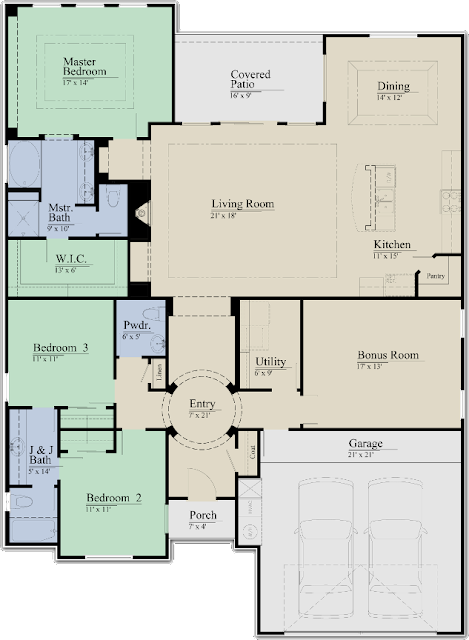 The downside of DH having a good job with a great company is that we're kinda stuck here until he retires. That feels like a lifetime away. And life feels awfully short, in light of my last 3 years. I get really down at the thought that if Cancer were to become an unwelcome guest, again (odds are not in my favor), I'd be trapped in an upstairs bedroom (since the only full baths in our house are on the upstairs floor) for the last days of my life. Perhaps it's not normal to dwell on death like this on the eve of one's 47th birthday, but it's not normal to have stage 4 colorectal cancer since age 44, either. If I'm going to die at home, I'd at least like to see blue skies out the window and have the ability to be wheeled-around the entirety of my home, including outdoors. My dad died in a basement apartment. He didn't have any access to the outdoors for the last weeks of his life. That has really stuck with me, as I have endured the very same Cancer that killed him. These are the sorts of thoughts that keep me up at night. And I'm up a lot at night, thanks to the long-term effects of trying to remove all of the known cancer in my body, along with some pretty critical body parts (learn all about LARS, Low Anterior Resection Syndrome).